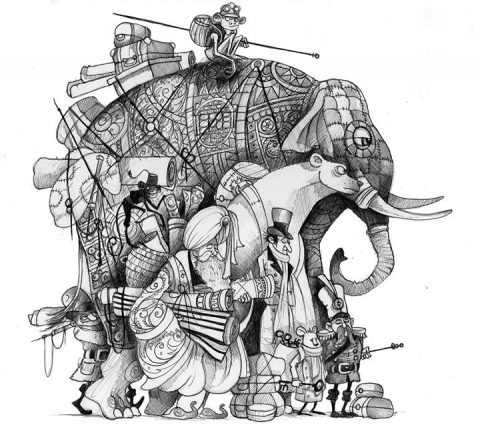 The third installment of Elsie Whiteley Innovation Centre’s popular Industry Rising series celebrates the work of local artists and collaborators, Chris Mould and Matt Howarth. The Night Market was a one-off temporary installation, created by artists Chris Mould and Matt Howarth, to bring to life and illuminate The Piece Hall’s north wall over the festive period. The Piece Hall is currently closed to the public whilst the building undergoes a multi-million pound renovation with plans to open later this year.

Here at Elsie Whiteley Innovation Centre we’re delighted to see investment in the regeneration of Halifax and also to celebrate the amazing talents of local artists by giving the public a second opportunity to see this enchanting animation. We give you, The Night Market …

Where people gather to buy and sell, this magic is potent. So potent that, over time, it has been known to fray the very fabric of the universe itself.

And as the sunlight fades and moonlight takes its place, this frayed fabric gives way and ‘others’ make the journey from ‘over there’ to ‘over here’.

They buy exotic spices and magical potions. They sell rugs and fabrics made of thread spun from light itself.

They buy charms and trinkets. They sell technology that is yet to be imagined.

And all are keen to sample Old Ma Kenworthy’s ‘Not Known’ wine and Billy Wilson’s meat ‘n’ potatey pie.

They trade all night, bartering and haggling until the light of the moon begins to fade and the first light of dawn illuminates the sky.

Then the traders pack up their stalls. The shoppers gather up their goods.

And one by one they return to ‘over there’, where ever their particular ‘over there’ may happen to be. And ‘over there’ they will remain until the sun goes down and the moon sheds its light on a faded and slightly threadbare patch in the fabric of the universe.”

You can see The Night Market on the mezzanine of the Elsie Whiteley Innovation Centre until the end of February,  available to view from 9 am until 6 pm, Monday to Friday.

More about the artists:

Chris lives in Bradford, West Yorkshire, and has been a freelance illustrator since graduating from Leeds Polytechnic in 1991. His work can be seen in children’s books, magazines, newspapers and many other forms of printed matter as well as television and feature film development work.

Matt has been working in the TV industry for the last twenty-five years, supplying high end animations, graphics and special effects to broadcasters and production companies worldwide. Based at nearby Dean Clough, the two have a creative partnership, having previously worked together to produce a series of animated short films for the BBC. Together, they have created a story of parallel universes and overlapping realities, the story of The Night Market.